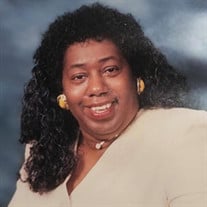 You can show your support by sending flowers directly to the family by contacting ROYAL DESIGN FLOWERS (870) 735-2000 or Debbie's Flowers (870) 633-2225, or by visiting www.etsy.com/shop/ShopYABAS Bertha O. Penix was born on May 13, 1948, to the union of Roy Willie Johnson and Alberta McCormick Johnson. She was the tenth of eleven children. At an early age she was a member of the Church of Christ; attending Saints Temple Church of God in Christ in Forrest City, Arkansas. Later, she converted to Baptist; attending El Cannon Missionary Baptist Church in Palestine, Arkansas, where she was the choir director and member of the mass choir for many years; and continued to worship and fellowship until her passing. Bertha attended Lincoln High School, Class of 1966 in Forrest City, Arkansas. She worked at GI Manufacturing Company for over 20 years in Forrest City. She attended East Arkansas Community College. Having a genuine love for children, Bertha earned her Childcare Licensure to run her own Childcare business for more than 20 years; nurturing and educating an abundance of young children. Bertha’s first marriage was to Lee A. Smith and to this union three children were born—Shelby Smith, Shawn Smith, and Sequoyah Smith. On March 18, 1996, she married her lifelong partner—Robert James Penix. Not having any children of their own; they fostered and cared for many children who were in need. Bertha passed away on Monday, May 31, 2022. She was preceded in death by her mother (Alberta McCormick Johnson) and father (Royal Willie Johnson)—brothers Royal and Charles Johnson, and sisters—Janell French, Lorraine Johnson, Luenne and Luann Johnson. She leaves behind to cherish her memory a husband—Robert James Penix, three children—Shelby Smith, Shawn (Gevena) Smith, and Sequoyah (Johnny)Moore, Sisters—Ruthie Kidd, Evester Roper, Cleadester Oates, and Hester Lucas, and Phillip Johnson, a many of nieces and nephews, grandchildren—Shereese McDaniel, Dustin Taylor, Douglas Taylor, Shelby Smith Jr., Daniel Smith, Reina Perry, Dalton Smith, Victoria Smith, Johnathan Moore, and Jayna Moore, and great-grandchildren.

The family of Mrs. Bertha O. Penix created this Life Tributes page to make it easy to share your memories.