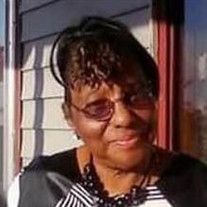 You can show your support by sending flowers directly to the family by contacting Debbie's Flowers 870.633.2225 Bernice Hawkins-Sparkman was born August 9, 1940 to the late Ivory and Walter Hawkins. Bernice accepted Jesus Christ as her Lord and Savior at an early age. She was a member of the Union Hill Members Baptist Church, where she served as one of the Mothers of the Church under the leadership of Pastor Hershel Smith. Bernice worked at G.I. Motors of Forrest City, Arkansas for eighteen years until the plant closed. She made a lot of friends along the way at this establishment. She later became a CNA through Carelink, a job she loved and for which she had a true passion. She worked there until her health started to decline, and she took an early retirement. However, her love for caring for others would not stop. In 1959 Bernice was married to Oscar Robinson, and to this union three children were born. In 1962 she married Willie B. Sparkman, and to that union she had three children. Bernice is preceded in death by her parents—Ivory and Walter Hawkins; one brother—Larvan Hawkins, Sr.; one sister—Mrs. Peggy Kindred; and two chil-dren—Phyllis Robinson Coleman and Ivory Renee’ Hawkins. Bernice leaves to cherish her memories her children—Melinda Robinson-Hawkins and Bernice Wilson (Cedric Williams’ fiancée) both of Forrest City, Arkansas, Charnell Robinson-Baker, Mitchell J. Sparkman, and Michael D. Sparkman all of Palestine, Arkansas, Ann Sparkman-Baker of Little Rock, Arkansas, Jonathan Robinson of Hot Springs, Arkansas; her adoptive chil-dren—Patricia Ann Clark (Artie), Kenneth L. Richardson, and Derotha Sims all of Forrest City, Arkansas, Dorthea Hawkins of Jonesboro, Arkansas, Leo-nard Hawkins (Jackie) of Maumelle, Arkansas, and Stanley (Tonya) Hawkins of Little Rock, Arkansas; one brother—Walter Hawkins, Jr. of Little Rock, Ar-kansas; one sister—Wanda J. Hawkins of Little Rock, Arkansas; her sib-lings—Wilford Banks, Wayman Banks of Palestine, Sandra Banks, Winifred Banks of Little Rock, Arkansas, Charlotte Banks of California, and Australia Banks of Fort Smith, Arkansas; and a host of nieces, nephews, cousins, and friends. Bernice also leaves behind special friends she talked to on a regular basis—Mrs. Ola Mae Barden, Ms. Ibeauty Smith, Mrs. Clotell, Mr. James McAdoo, Ms. Louis Parchman, Mrs. Sally Williams, Mrs. Beatrice Lynch, and Mr. Eddie Charles Holland.

You can show your support by sending flowers directly to the family by contacting Debbie's Flowers 870.633.2225 Bernice Hawkins-Sparkman was born August 9, 1940 to the late Ivory and Walter Hawkins. Bernice accepted Jesus Christ as her Lord... View Obituary & Service Information

The family of Mrs. Bernice Hawkins Sparkman created this Life Tributes page to make it easy to share your memories.