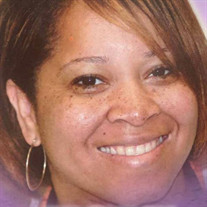 You can show your support by sending flowers directly to the family by contacting Debbie's Flowers 870.633.2225 Bernetta Jones was born March 9, 1973 to Amos “Dad” and Rosie Lee Burgess. She was the youngest of twelve children. She and her siblings were raised in church and taught the value of hard work. Bernetta was preceded in death by her father, mother, brother: Freddy Burgess, and sister: Pearlene Barnett. Bernetta married the love of her life, Roderick Jones, on March 9, 1996. They were blessed with three children: Emma Lanora Jones, Lynal Tirrrell Jones and Alexis Rosaria Jones. Bernetta was affectionately nicknamed “Bae Bae” by her siblings and loved ones. She was the proud baby of the family and was always cherished. Bernetta was known as a warrior. Church members looked forward to hearing her bring a word and give her testimony of the goodness of God. She was a woman of faith and few words. She enjoyed the simple things of life, such as, family, dollar stores, homemaking, watching old tv shows and living her life for the Lord. Her home beautifully decorated, blessed, and clean at all times. Bernetta earned her high school equivalent degree while she stayed home to be the caregiver for her ill mother. Bernetta graduated from Cosmetology School in 1999. After marrying, she was blessed to stay home as a housewife for many years. Later, she opened her heart and home to children of family and friends providing loving childcare. She was an immaculate housekeeper. Bernetta worked as a Certified Nurse Assistant (CNA) for Crest Park Retirement Home briefly. She worked for Kids for the Future as a lead teacher and supervisor. She took great pride in her job. God showed her favor during her years at Kids for the Future and she met a lot of wonderful people. She sang with her mother, sisters, and aunt and they were known as the Wondering Aires. Bernetta served in many roles at Cedar Grove Church of Jesus Christ in Round Pond, Arkansas. She has been a faithful member there all of her life. She served as a Sunday School teacher for the youth, Vocational Bible School (original) teacher and organizer, and a mighty missionary with a powerful message. Bernetta departed this life on January 7, 2021 leaving precious memories with her three children: Emma Lanora Jones, Lynal Tirrell Jones, Alexis Rosaria Jones, and godson, Marvin C. Barnett. Her siblings will miss her dearly. She is survived by four sisters: Roberta (Robert) Echols, Nancy Ann (Archie) Butler, Ruthie (Cleave) Whitby, and Bernice (Kenneth) Word; five brothers: Jonathan (Alma) Burgess, Sr., Amos (Doris) Burgess, Jr., Terry (Pauline) Burgess, Sr., David (LaSonya) Burgess, Sr., and Elbert (Debra) Burgess. She also leaves a sister-in-law: Cora Jones and two brothers-in-law: Derrick Jones and Joseph Jones along with aunts, uncles, nieces, nephews, and cousins. Bernetta’s soulmate, Roderick Tirrell Jones, made her life bountiful. He was her best friend, confidant, loving spouse, protector, provider, and eventually her caregiver. No role was above or beneath him when it came to his “baby”. He loved her unconditionally.

You can show your support by sending flowers directly to the family by contacting Debbie's Flowers 870.633.2225 Bernetta Jones was born March 9, 1973 to Amos &#8220;Dad&#8221; and Rosie Lee Burgess. She was the youngest of twelve children.... View Obituary & Service Information

The family of Mrs. Bernetta Jones created this Life Tributes page to make it easy to share your memories.