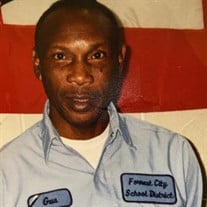 On October 10, 1947, Augusta “Gus” Dixon, Jr. was born in Bassett, Arkansas (Mississippi County) to Katherine Dixon and Augusta, Dixon, Sr., both of whom preceded him in death, as well as his sister—Lourine Perry. Gus confessed a hope in Christ at an early age and, in 1981 he was ordained as a minister at the Union Grove Missionary Baptist Church. Later in life he met Fredy Mae Dixon, and they married on September 30, 1990. He worked for the Forrest City School District for many years beginning as a truancy officer. After choosing fishing over that position, he continued to work in the schools doing detail where he gained many friends. He worked in the school district until his health began to fail. Gus never met a stranger. He spent his free time fishing, cooking, or working around the house. Gus departed this life April 20, 2020. He leaves to cherish his memory his wife—Fredy Mae Dixon; one son—Erric (Shenika) Dixon of Las Vegas, Nevada; one daughter—Shateria Dixon of Forrest City; three stepdaughters—Karen White of Arizona, KaTrina Brown of Forrest City, Arkansas, and LaShondon (Lesley, Jr.) Taylor of Kansas City; two sisters—Katherine Beal and Willie Bell Carpenter both of Little Rock, Arkansas; four brothers—Leon (Nicole) Dixon, Ocie Lee (Dean) Dixon, Joe David Dixon, and Sam Dixon also all of Little Rock, Arkansas; four grandchil-dren; four step grandchildren; a loyal and devoted friend—Gene Steverson (May God Bless You); and a host of nieces, nephews, and friends.

On October 10, 1947, Augusta &#8220;Gus&#8221; Dixon, Jr. was born in Bassett, Arkansas (Mississippi County) to Katherine Dixon and Augusta, Dixon, Sr., both of whom preceded him in death, as well as his sister&#8212;Lourine Perry. Gus confessed... View Obituary & Service Information

The family of Reverend Augusta "Gus" Dixon created this Life Tributes page to make it easy to share your memories.