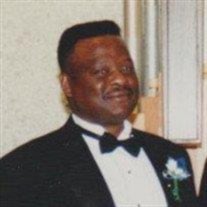 On Wednesday, April 15, 2020, Arthur Lee Smith died while he was asleep at his residence in Carroll, Iowa. Arthur Lee was born February 18, 1960 in Hughes, Arkansas to the late Ed Louis and Effie Mae Smith. He was preceded in death by his parents;... View Obituary & Service Information

The family of Mr. Arthur Lee Smith created this Life Tributes page to make it easy to share your memories.