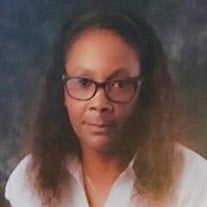 You can show your support by sending flowers directly to the family by contacting ROYAL DESIGN FLOWERS (870) 735-2000 or by visiting www.etsy.com/shop/ShopYABAS Angenette Denise Smith was born to the union of Mose Harris, Sr. and Lottie Pryor Harris on June 24, 1966. She departed her earthly life on December 25, 2021, with her dear husband by her side. At an early age Angenette showed her love for the Lord and dedicated to Christ. She would often find herself following the Gospel Pearls to sing and make a joyful noise unto the Lord. She was a faithful member of Wofford Chapel Missionary Baptist Church. She also served as a member in the choir and on many committees. Angenette married the love of her life Percy Smith on May 25th, 1991. She worked at the Phillips County Health Department for 12 years as well as Crestpark as a Certified Nurse's Assistant. In 1994 Angenette began a long career service with the United States Postal Service. She was a strong woman who stood her ground. She mentored many throughout her years of service. Angenette's love for family, neighbors, and friends was undeniable. She was a friend to many and stranger to none. She met you with a smile, kind words, and loving gestures. She loved flowers and gardening. Although she wasn't a big sports fan, she enjoyed rooting for the underdog. Angenette is preceded in death by her mother, Lottie Pryor Harris, her father, John L. Augusta, one sister, Johnny Mae Augusta, two brothers, Larrie Jackson and Mose Harris, Jr. Angenette leaves to cherish her memory, her husband of 30 years Percy Smith; her only son Allen Ray Harris Sr.; three beautiful grandchildren, Allen Ray Harris Jr., Rayvan Angenette Harris, and Karter Louis Harris; a dear nephew that she along with her husband raised as their own McArthur Thomas; three sisters, Loretha Tobar (Alvin), Cynthia Wilson, and Patricia Thomas; five brothers, Eugene Starr, Ray Pryor (Mary), Derrick Harris (Shannon), Mark Harris and Michael Brown; one uncle Odell Pryor (Willie Mae); three stepsons, Eric Jones (Jameele), Ervin Calhoun (Felicia), and Markelius Calhoun; three stepdaughters, Patresa Logan (Alonzo), Tomeka Malone (Mike), and Isis Watson (Lee); sisters and brothers in law, Paulette Smith- Taylor (Lincoln), Alesia Jackson, Charles Smith, Earnest Smith, Jr. (Beverly), Eugene Washington (Katie), Lee Ester Smith (Tammy), and Bruce Smith; a very special nephew, Jacoby Smith (Syreeta).

You can show your support by sending flowers directly to the family by contacting ROYAL DESIGN FLOWERS (870) 735-2000 or by visiting www.etsy.com/shop/ShopYABAS Angenette Denise Smith was born to the union of Mose Harris, Sr. and Lottie Pryor... View Obituary & Service Information

The family of Mrs. Angenette Denise Smith created this Life Tributes page to make it easy to share your memories.