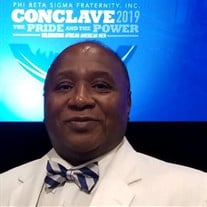 You can show your support by sending flowers directly to the family by contacting Debbie's Flowers 870.633.2225 or by visiting www.etsy.com/shop/ShopYABAS Anderson Lee Burgess was born in Forrest City, Arkansas November 3, 1958, the son and third child of Mr. Hosea and Mrs. Vera Hudson Burgess. Anderson grew up in Widener, Arkansas and went through public schools at DeRossitt Elementary and graduated from Forrest City High School in 1977. After high school Anderson began his collegiate studies and attended the University of Arkansas at Fayetteville. While attending college he pledged Phi Beta Sigma Fraternity, Inc., Kappa Upsilon Chapter and from that point he was known as “Teddy B / Ted.” In 1979, he formally met Annette Phillips and they were married on December 28, 1981. In 1983 he joined the United States Air Force and during his tenure he finished his bachelor’s and master’s degree at Saint Leo University. Anderson dedicated 21 years to the United States Air Force and retired. He furthered his career working for Southern University, Family Dollar Warehouse, Crowley’s Ridge Technical Institute, and was presently an IT Tech for East Arkansas Community College where he was faithful until his demise. He served Phi Beta Sigma Fraternity, Inc. with honor, distinction, professionalism and always demonstrated genuine love and respect for his brothers and Sorors of Zeta Phi Beta Sorority, Inc. He maintained an active and financial membership throughout his fraternal association beginning with Kappa Upsilon Chapter and ultimately with the Iota Tau Sigma Chapter for the remainder of his life. He was great with computers. He was good to the point that he was appreciated by other professionals. Anderson was preceded in death by his parents, Mr. Hosea and Mrs. Vera Hudson Burgess; father and mother-in-law, Mr. Tommy and Mrs. Zeopha Phillips; and a brother, Jerry Burgess. Anderson will be remembered for his love for her family, friends, and always selflessly doing the most for his loved ones. His love for his wife, children, grandchildren, siblings, fraternity brothers and sorority sisters is indescribable. The world is darker without his light in it, but we are comforted knowing that he is now with the Lord. Anderson Lee Burgess leaves to cherish his memories his wife, Annette Burgess of the home; two daughters, Tiffany (Darren) Henderson of Forrest City, AR and Jasimin Burgess of Widener, AR; four grandchildren, Josua Burgess, Dominick Whiteside, Olivia Henderson, and Angel Marie Burgess; brothers, Larry (Norma) Hudson of Little Rock, AR, Rodney (Juanita) Burgess of Widener, AR, Curtis (Lordis) Burgess of Tucson, AZ, Terrence (Cherryl) Burgess of Madison, AR, Keith (Cass) Burgess of Widener, AR; sisters, Jacqueline Burgess of Forrest City, AR, Regina Burgess of Widener, AR, and Crystal Burgess of Jonesboro, AR, brothers and sister in law, nieces, nephews, cousins, brothers of Phi Beta Sigma Fraternity, Inc. and sisters of Zeta Phi Beta, Sorority, Inc., other relatives, and friends.

You can show your support by sending flowers directly to the family by contacting Debbie's Flowers 870.633.2225 or by visiting www.etsy.com/shop/ShopYABAS Anderson Lee Burgess was born in Forrest City, Arkansas November 3, 1958, the son and... View Obituary & Service Information

The family of Brother Anderson Lee "Teddy B" Burgess created this Life Tributes page to make it easy to share your memories.