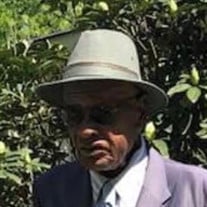 You can show your support by sending flowers directly to the family by contacting Debbie's Flowers 870.633.2225 or by visiting www.etsy.com/shop/ShopYABAS Anderson Boyd, affectionately known as “GreGre” by his grandchildren and “Uncle Bay” by all of his nieces and nephews, was born September 17, 1938 to John and Lundia Boyd in Starkville, Mississippi. His faith in Christ was professed at an early age. On March 17, 1958 he was untied in holy matrimony to Emma Lee Hodges– Boyd, and to this union six children were born. He was a devoted husband and father who valued his family and held them in high esteem. He loved fishing with Aunt Mattie, watching his Dodgers (baseball), listening to his radio in his truck, and watching wrestling. He was always up for telling a good joke to make you laugh. His sense of humor was every-thing even up until his last days. He worked as a farmer until his retirement in 1995. He worked every day from sunup until sundown to provide for his family. Anderson Boyd was saved and a faithful member of Madison Light Baptist Church in Madison, Arkansas. He was a dedicated member who loved his church family. He was called home to be with his Lord on Thursday, April 29, 2021 at his home in Crow Creek with his wife by his side. He is preceded in death by his parents—John and Lundia Boyd; his four brothers—Charlie Boyd, Joe Boyd, Luther Boyd, and Henry Boyd; his one sister—Mildred Gibbs; and his son—Dale Boyd, Sr. He leaves to cherish his memory his beloved wife of 63 years—Emma Lee Boyd; his two daughters—Emma Jean Charles of Little Rock and Evette Boyd of Forrest City; three sons—Anderson David Boyd, Jr. of Forrest City, Danny Boyd of Bremerton, Washington, and Dennis (Nicole) Boyd of Swansea, Illinois; 14 grandchildren; 7 great grand-children; and a host of nieces, nephews, other relatives, and friends.

You can show your support by sending flowers directly to the family by contacting Debbie's Flowers 870.633.2225 or by visiting www.etsy.com/shop/ShopYABAS Anderson Boyd, affectionately known as &#8220;GreGre&#8221; by his grandchildren and... View Obituary & Service Information

The family of Mr. Anderson D. Boyd created this Life Tributes page to make it easy to share your memories.