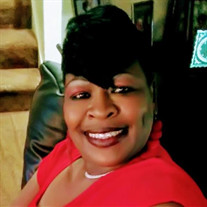 Alga Jean Jones was born March 30, 1965, in Forrest City, AR to Willie Jones and Samella White Jones. She is the fourth of ten siblings. Alga attended Forrest City High School, where she graduated in 1984. Alga continued to reside in Forrest City, AR throughout her adult years until she moved away to Kansas City, MO in 2017. There she started a new life journey meeting new people who became family to her. Alga decided to come back home to Arkansas in 2020, where she began her employment with Belleville Boot. Alga was the life of any party! During her free time, she loved spending time with her family and friends, listening to music, and cooking out. Everyone that knew her knew she would speak her mind and still love you the same. Alga was like a mother to many. On Thursday, January 6, 2022, Alga departed her life at Washington County Hospital in Fayetteville, AR. She was preceded in death by her father—Willie Jones; her two sisters—Barbara and Tracey Jones; and a very close family member that was like a son to her—Leroy White, Jr. Alga leaves to cherish her precious memories her mother—Samella Jones of Forrest City, AR; her children—LaTrina Jones, Kevin Jones, Kasundra Jones (Kenneth Rucker) of Kansas City, MO, and Marquita Allen (Andrew Hunt, Sr.) of Madison, AR; four brothers—Charles Jones (Donna Thomas), Robert Jones, Clarence (Jennifer) Jones, and Larry Jones all of Forrest City, AR; three sisters—Carolyn (Jerry) Green, Shirley Jones, and Stacey Jones all of Forrest City, AR. Alga also leaves to cherish her memories a very special friend—Darrell Taylor, and a host of uncles, an aunt, nieces, nephews, cousins, and friends.

The family of Ms. Alga Jean Jones created this Life Tributes page to make it easy to share your memories.