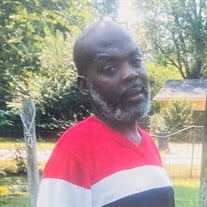 Albert Hartman, Jr. was born March 5, 1972 by way of midwife in Phoenix City, AL to Albert Hartman, Sr and Helen (Hartman) Woods. He made his departure from his earthly vessel to his heavenly home on Monday, October 12, 2020 in Forrest City, AR. Albert was brought up in his family church of Grant Chapel CME Church in Columbus, GA under the leadership of Reverend Hendrix: where he enjoyed attending Sunday School and Vacation Bible School with his brothers and sisters. He accepted Christ at Paradise Missionary Baptist Church in Marianna on September 15, 2019 under the leadership of Reverend Ervan Garrett. Albert attended school for early education in Columbus, GA and attended Le Coron Bleu College of Culinary Arts, earning an Associate Degree in Culinary Sciences in 2009, becoming a Certified Chef. Albert loved cooking and enjoyed working in many different places and cooking different kinds of food. Albert was a GOOD TIME! You could always count on seeing his big smile and his “ATL” moves. He had a generous spirit and always found it easy to make friends and have a conversation. He enjoyed “bending a few corners” to “check on his people”. During his short time in Forrest City, Albert became a friend to many. He was a DIE-HARD ATLANTA fan and LOVED ALL THINGS ATL and Georgia. ANYBODY who knows Albert knows this. He loved to tell stories about growing up with his siblings, friends, aunts, uncles, and cousins to who he is affectionately known as “Junior”. Albert will forever be in the hearts and thoughts of many. He leaves behind to cherish his memory; his partner Nadia Davis of Forrest City, AR; two daughters; Leslie of Forrest City and Hadeara of Atlanta, GA; mother, Helen Woods of Columbus, GA; father, Albert Hartman, Sr (Patricia) of Columbus, GA; four brothers: Stevie of Atlanta, GA; Jeffrey (Marilyn) of Atlanta, GA; Calvin of Atlanta, GA; and Rudy of Columbus, GA; and host of nieces, nephews, aunts, uncles, cousins and an abundance of friends. Albert was preceded in death by his baby sister Yvonne D. Hartman.

Albert Hartman, Jr. was born March 5, 1972 by way of midwife in Phoenix City, AL to Albert Hartman, Sr and Helen (Hartman) Woods. He made his departure from his earthly vessel to his heavenly home on Monday, October 12, 2020 in Forrest City,... View Obituary & Service Information

The family of Mr. Albert "Chef" Hartman Jr. created this Life Tributes page to make it easy to share your memories.