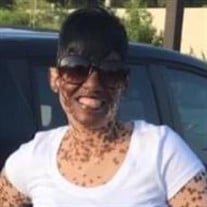 You can show your support by sending flowers directly to the family by contacting Debbie's Flowers 870.633.2225 Airficia Johnson, better known as “Feka”, was born Tuesday, May 22, 1979 to Rita Kay Johnson and Joe Willie Mays in Forrest City, Arkansas, where she was properly raised by her late paternal grandmother—Eddie Mae Mays-Veasly. She attended school at Forrest City High School. Feka accepted Christ at an early age at Union Grove Missionary Baptist Church. She later joined United Christian Missionary Baptist Church under (in her words), “MY PASTOR, DR. LATHAM.” Her cleaning skills would leave you speechless. Once she started, there would be no stopping until every-thing (literally) was spotless. Cleaning was therapeutic for her. She was very respectful, and had a heart bigger than this world. She was so giving, and she did it genuinely. Feka was the life of any event she attended, especially her boys’ football games. She loved to dance and have fun. The love and support for her kids and Gigi’s babies, was like no other...it was profound! She was preceded in death by her mother—Rita Kay Johnson; paternal grandmother—Eddie Mae Mays-Veasly; maternal grandmother—Catherine Johnson; paternal great grandmother—Katie Mays; paternal great grandfather– Walter Mays; and maternal great grandmother—Georgia Hollis. Airficia, “Feka”, leaves to cherish her memories her father—Joe Willie Mays; two daughters—Trayana Wonsley and Mardesha Johnson; two sons—Stephon Johnson and Kendriel Johnson; three grandchildren (Gigi’s babies) - Dallas Madden, Avery Wonsley, and A’Riyah Bell; three sisters—Eri’ckia Johnson, Monica Gregory, Tamara Mays; two brothers—Catrelle Mays and Terrance Mays; a special aunt—Vikita Brown; two special cousins—Travis Williams and Pakita Swift; three nephews—Ladarrius Hardrick, Justin Mays, and Tylon Johnson; three nieces—Jessica Gregory, Demetria Devall, and Nia Mays; three cousins she treated as nephews—Terrance Williams, Kentrell Williams, and Jacob Brown; a bonus son she loved as her own— Dominique Madden; and a host of other relatives and friends. “Mama, you are forever in our hearts. We will miss you tremendously. Your nurturing was like no other. Thank you for the love and support you gave us. God could not have blessed us with anyone better than you. We love you, Mom. Fly high, BOOP! -Your Children

You can show your support by sending flowers directly to the family by contacting Debbie's Flowers 870.633.2225 Airficia Johnson, better known as &#8220;Feka&#8221;, was born Tuesday, May 22, 1979 to Rita Kay Johnson and Joe Willie Mays in... View Obituary & Service Information

The family of Ms. Airficia Rena Johnson created this Life Tributes page to make it easy to share your memories.